June 21 -  So, after the brief Internet notoriety that I received from being mentioned recently in the Comic Book Urban Legends Revealed feature about Crusty Bunker, I've had some further information on the subject come my way.  And by "information," I mean "a correction."  Maybe.  On the 13th, I received this message...
Hi, John,
I just found your blog via Comics Should Be Good, specifically their piece on the Crusty Bunkers. As someone who researched Dave Cockrum's life pretty thoroughly for this month's Alter Ego, I was surprised to see his name listed as a Crusty Bunker. I have to ask, what's your source on that? My understanding of the Crusty Bunkers is that they were a group of artists that worked out of Neal Adam's Continuity Associates in the 1970s, and given that Cockrum worked from home, that pretty much excludes him from that list. If you know of a specific issue where he was listed as a Bunker, I'd be interested in tracking it down.
Thanks,
Glen Cadigan
So, I replied (in part)...
Hi, Glen -
As for a specific Cockrum-Crusty issue, I have no good information.  My inclusion of Mr. Cockrum's name on the list comes from on-line resources, like the late Jerry Bails' Who's Who of American Comic Books, where Mr. Cockrum is listed as a Bunker.  In a conversation with fellow Crusty Joe Rubinstein, I learned that some Bunkers, like Jeff Jones, were just visiting Continuity one day, and only provided what could be called "token involvement," just to say they did it.  You probably have a much better idea whether Mr. Cockrum was even available for such a thing.  Sigh.  That's why I'm not an actual reporter, I suppose.  Good luck with your piece.  Please let me know if you do nail down some specific issues, and I will post that info along with my old Crusty Bunker stuff (oh, and if it's OK with you, I'll also post your concerns about whether Mr. Cockrum even was a Crusty, just to keep on the "up and up.").  Thanks for the question.  I hope I helped a little.  See ya!
John Mundt, Esq.
Mr. Cadigan replied by saying...
Thanks, John!  Dave's inclusion as a Crusty Bunker in Jerry Bail's Who's Who was a mystery to me. It was enough for Roy Thomas to include it in a checklist in this month's Alter Ego, even though I told him that I didn't think it was accurate.
For the record, the only times that Dave Cockrum didn't work from home were when he was Murphy Anderson's assistant and when he went on staff at Marvel following his first run on the X-Men. I suppose it's possible that he stopped by Continuity during that period when he left DC and before he started drawing the X-Men for Marvel, but to me the Crusty Bunkers will always be a group of guys that had studio space at Continuity, and that excludes Cockrum. Back when he was alive, this was exactly the sort of question which he would answer on his message board, but unfortunately that's no longer an option.
It's okay with me if you share this with the masses. And BTW, the article is past the point of luck - it's currently on the stands (#78)!
Thanks again,
Glen
So, do I take Dave Cockrum out of the mix, or leave him in...but with an asterisk?  I already had a "maybe" list - which included only three names; Frank Miller, Barry Windsor Smith, and Wally Wood - so I suppose I should add Mr. Cockrum to that group...except, well...except that they are nearly ALL "maybes" because, as I told Mr. Cadigan, "I'm not an actual reporter."  I'm starting to feel that I should be, though.  My personal, nearly internal exploration of The Lives and Time of Crusty Bunker has evolved into an "authoritative" on-line resource...which I'd never really intended.  Still, there it is.  I told you a few days ago that I've been thinking about revisiting the subject of The Crusty Bunkers.  At first, I'd considered just having a Second Annual Crusty Bunker Month, but, in light of my sporadic e-posting, that seemed more like a nice thought than a real possibility.  Then I thought about starting up a Crusty Web-Site, but, considering that I'm not the owner of the name or anything (if there is one), that's probably "out" as well.  So, settling on something between the two, I'm going to start a Crusty Bunker info page within johnmundtesquire.com.  It may take some time (in fact, it may take months), but it seems like there is an actual need for it.  For example, many of the suppositions that I posed could be cleared up by simply asking one of the living Bunkers about them.  It would be nice to have an "official" place to post such remembrances, especially before, as Mr. Cadigan put it, "that's no longer an option."  In fact, I have my first such question, which I will post here now; did Louise Simonson ever contribute to a Crusty Bunker project?  She was an active participant in the New York comics scene at the same time, even providing inspiration for the iconic 1971 Berni Wrightson cover of House of Secrets #92. 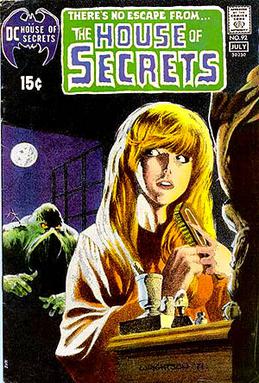 Oh, and she has been married to two different Bunkers over the years!  Until I have the means to ask Mz. Simonson herself, I'll just hope that she might read this post someday and choose to respond.  Until I get that page going, any answer will be posted here.  For now, here is your Scarred Comic Book Character of The Day for - Marv!
Collapse